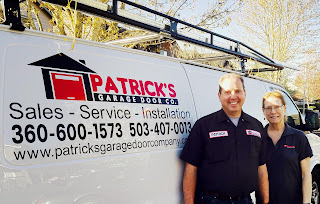 I had Patrick's install a new opener in our house as the old one was worn out and didn't have some of the safety features newer openers have.

From my initial call with Patrick to the install with Dave they were very helpful and offered me several options letting me make an informed decision instead of simply trying to sell me on something.  Dave not only did a great job on the installation, but also took the time to thoroughly explain the answers to all my questions.  I will definitely use Patrick's for all future garage door needs.

OK then!! That was unexpected!!

OK then!! That was unexpected!!

I always dread having repair companies come to my house, however today I called Patricks around 1pm.. Its now 430 pm and my garage door which had a broken coil is now fixed!  And he oiled the other door for me too!  Great work, fair price.  Both the office and Christian were friendly and helpful.  Won't use anyone else
Anonymous
Comments

I hired Patrick to put in my gdo years ago.He was here when he said, and had it installed in no time. I was impressed with his ability, professionalism, and the price for the service. So naturally when my spring broke, i called Patrick. He came when scheduled, had it fixed, and what impressed me, was the extra hinges he put on, at no charge, stabilizing the door. Lubricated everything, tested, and asked if i was satisfied. Can't get a better Company!
This was over a 13 year period!
Anonymous
Comments 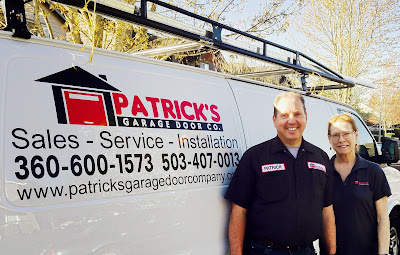 I never thought I'd be reviewing a company that does garage doors but I've got to admit they were fast reasonably priced and VERY HONEST. I've had them come twice now, once for a broken spring and the last time which I thought was my actual motor and turned out to be just a worn out gear. This is what a small local business is supposed to be like and I can't recommend them enough. 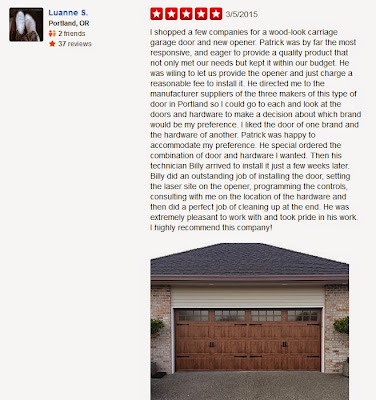 I shopped a few companies for a wood-look carriage garage door and new opener. Patrick was by far the most responsive, and eager to provide a quality product that not only met our needs but kept it within our budget. He was wiling to let us provide the opener and just charge a reasonable fee to install it. He directed me to the manufacturer suppliers of the three makers of this type of door in Portland so I could go to each and look at the doors and hardware to make a decision about which brand would be my preference. I liked the door of one brand and the hardware of another. Patrick was happy to accommodate my preference. He special ordered the combination of door and hardware I wanted. Then his technician Billy arrived to install it just a few weeks later. Billy did an outstanding job of installing the door, setting the laser site on the opener, programming the controls, consulting with me on the location of the hardware and then did a perfect job of cleaning up at the end. He was extremely pleasant to work with and took pride in his work.
I highly recommend this company!
Anonymous
Comments

Want to know how to replace or fix something around your home???

Here you go videos from Lowes 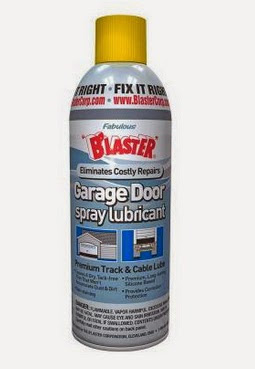 Between maintenance appointments! This stuff may help.
B’laster Garage Door Lubricant is a silicone-based lubricant that leaves a tack-free film that won’t accumulate dust and dirt. In some instances, its extreme pressure agents make it a suitable replacement for grease. It effectively helps stop squeaks associated with garage doors and mechanisms.
Home Depot B'LASTER
Anonymous
Comments 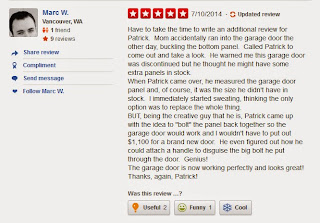 Have to take the time to write an additional review for Patrick.  Mom accidentally ran into the garage door the other day, buckling the bottom panel.  Called Patrick to come out and take a look.  He warned me this garage door was discontinued but he thought he might have some extra panels in stock.
When Patrick came over, he measured the garage door panel and, of course, it was the size he didn't have in stock.  I immediately started sweating, thinking the only option was to replace the whole thing.
BUT, being the creative guy that he is, Patrick came up with the idea to "bolt" the panel back together so the garage door would work and I wouldn't have to put out $1,100 for a brand new door.  He even figured out how he could attach a handle to disguise the big bolt he put through the door.  Genius!
The garage door is now working perfectly and looks great!
Thanks, again, Patrick!
Anonymous
Comments 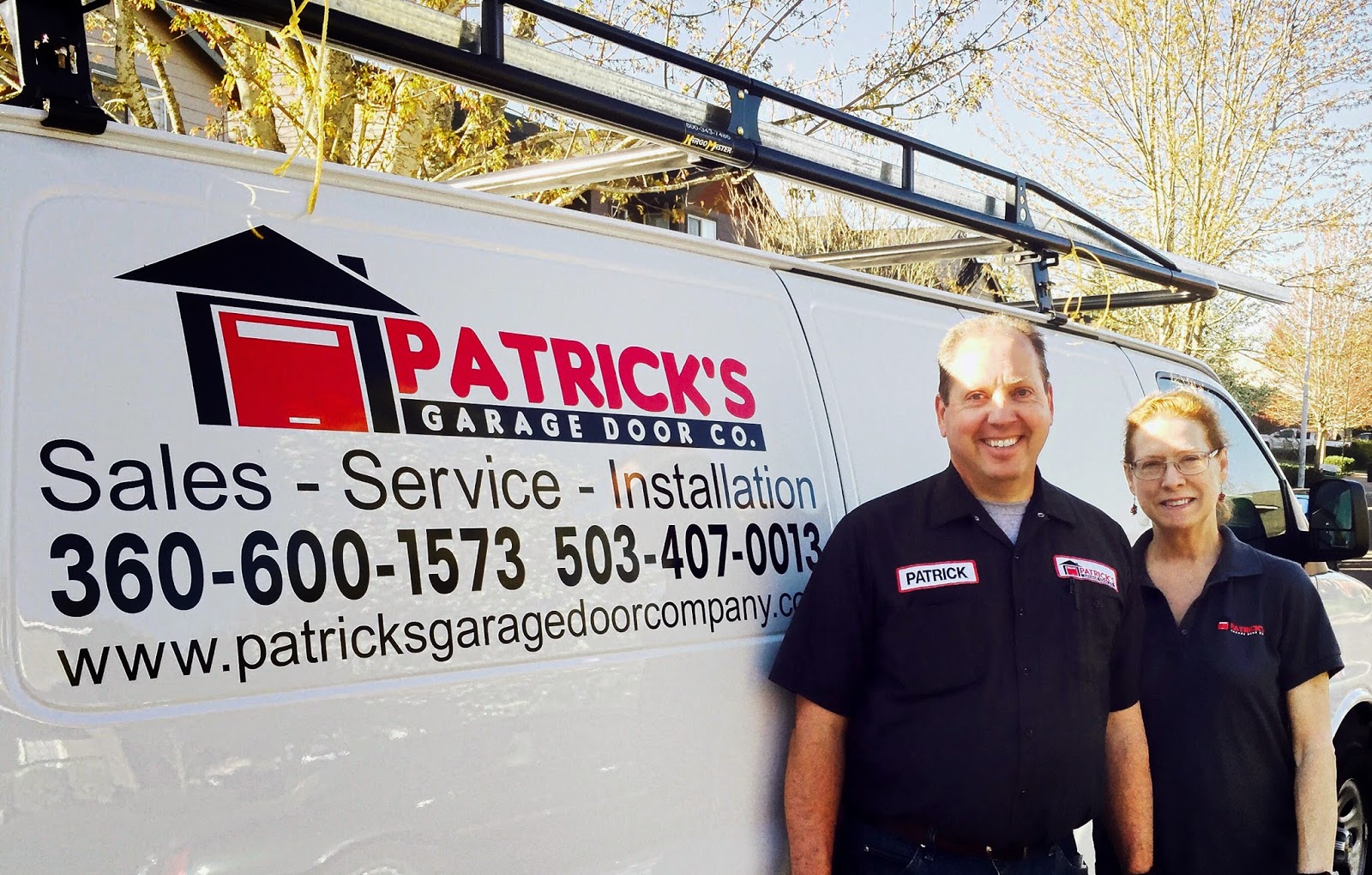 Improper use of a garage gate :-) Fail!
Anonymous
Comments

Some people are sick!

Some people are sick!

Residents in a quiet cul-de-sac were shocked to discover a pet cat had been decapitated, its paws cut off and a threatening message painted in the animal's blood on a garage door.
Rhonda Gibson, who lives a few doors down from the targeted house on Hazel Court in Arundel, told the MailOnline the Gold Coast suburb is usually very quiet as most of the residents are either retired or young families.
'It's a really quiet area and there's lots of retired people in the area.'
Scroll down for video +3
A message was left on a garage door at a Gold Coast home in the early hours of this morning while their car was set on fire
'Nothing much ever really happens here.'
When news that a cat had been mutilated a few houses down reached the Gibsons, as cat owners they were very upset.
'Of course that makes you feel ill, but thankfully it wasn't our cat,' Mrs Gibson said.
She also said residents in the house next-door to the targeted home told her they felt the force of the fiery car when the explosion rattled their windows and shook their home.
There had been no previous trouble in the street, and the residents of the house involved were not known to Mrs Gibson or her husband.
An investigation is underway after a car was also set alight outside the same home in Queensland in the early hours of Tuesday.
The torched vehicle, a Toyota Corolla, belonged to the homeowners.
A gruesome message left on the exterior of the house, in what's believed to be cats blood read: 'Whers (sic) my money? Tik Tok!'.
Residents and neighbours were woken by a loud explosion around 2.45am and police found the severely mutilated cat near the burning vehicle.
The cat's head was left at the front door of the house.
People thought to be the homeowners were seen cleaning the graffiti off the garage door later on Tuesday morning.
Cat's blood used to write threat on Gold Coast house +3
Residents were seen cleaning the horrific graffiti off their wall alongside their burnt car
Senior Sergeant William Lithgow from Southport Station told the MailOnline the incident appears likely to be an ongoing matter with the occupants.
'It's not a random act, the home was targeted specifically.'
The cat had been 'decapitated and otherwise dismembered', though the animal did not belong to residents at the home, Senior Sergeant Lithgow said.
'Police are continuing to investigate and the occupants are cooperating.'
Detective acting Inspector Greg Aubort said the occupants were disturbed by the message.
However, he would not say whether they had an idea who was responsible or if there were likely to be organised crime links.
'We're interviewing the occupants and looking for motives of any persons of interest that might be involved,' he told said.
Insp Aubort said given the nature of the incident, police were eager to catch the culprits as soon as possible.
'It's an abhorrent attack on an animal,' he said.
'I think any case where you have the intentional killing or maiming of an animal is a disgusting act and we'll certainly be looking to prosecute those responsible to full extent of the law.'

+3
Police were called to the Arundel address after reports of an explosion
RSPCA Queensland has offered a $5000 reward to help catch those responsible for the incident.
'They cannot get away with this,' CEO Mark Townend said.
'This is one of the worst acts of animal cruelty that the RSPCA has seen.'
Mr Townend said he feared the offender would strike again.
'It's a stepping stone to violence against people,' he said.
Investigations are ongoing and anyone with information have been urged to contact Crime Stoppers on 1800 333 000.

We do not transport garage doors like this!
Anonymous
Comments